The Summer Conference 2021 was held at the Sagamore Hotel in Bolton Landing, NY and was attended by more than 100 District Attorneys and executive staff.  DAASNY gave the Hogan Award to New York County District Attorney Cyrus R. Vance, Jr. who is not seeking re-election.

The Hogan Award honors a District Attorney who exemplifies the values for which DA Frank Hogan stood for- integrity and an unwavering commitment to achieving justice and fairness to all who come before the Court. Hogan was the esteemed District Attorney of New York County for more than 30 years and was elected to nine-four year terms.

“DA Vance has not only been a valuable member of DAASNY, but of the New York legal community at large. DA Vance expanded the impact of his office beyond the traditional courtroom role to encompass sustained investment in communities, reform of the criminal legal system, and the proactive prevention of cybercrime, terrorism and other modern day criminal threats,” said DA Doorley.

“Throughout his time as Manhattan District Attorney, Cy Vance has been a valued member of our organization. He served as DAASNY President in 2012 and remains a member of the Board of Directors. His efforts both in New York and nationally have contributed significantly to the advancement of fair and equitable justice. His presence will be greatly missed,” said President Jordan.

The New York Prosecutors Training Institute (NYPTI) presented three Prosecutor of the Year Awards. The winners were selected from nominations by District Attorneys across the state. The awards are given to New York prosecutors who have enhanced our criminal justice system in the courtroom and local community. 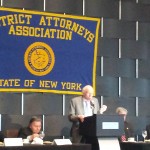 Following a brief luncheon, the always-inspiring presentation of accolades commenced.  Each year, one elected district attorney is honored with an award in the name of Frank Hogan, the long-serving district attorney from New York County known as “Mr. District Attorney.”  Additionally, four Assistant District Attorneys are nominate by their district attorney for the honor of receiving the Morgenthau Award, named after the legendary Robert Morgenthau.  This year, the DAASNY president also offered special recognition of Susan Valle, Executive Director of the New York Prosecutors Training Institute, for her service to the profession. 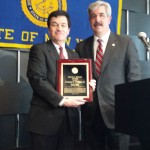 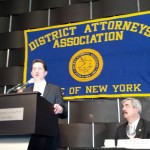 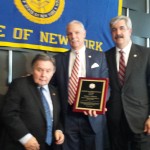 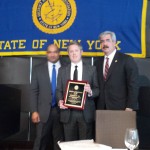 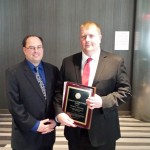 The President’s Special Recognition was presented to Susan Valle. 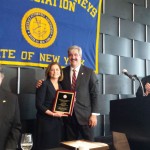